Hiya gang!  Today I'm bringing you a project featuring the Adventurous Alpaca digital stamp.  This guy made an appearance on my blog a while ago but I just had to bring him back! 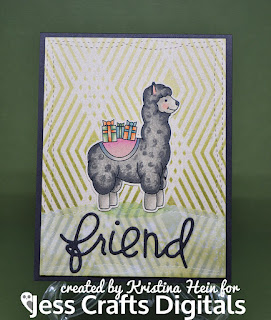 I colored him up with Copic markers.  I attempted to give him some texture in his fur by adding extra curls.  He is a such a happy guy!  I was also going for a more masculine feel and think it worked pretty well.  The background was sponged with three different distress inks using a new Hero Arts stencil  I love it!

He's standing on a hill I cut out of vellum.  I sponged ink onto the vellum and splattered it with water to get some more texture.  He needed something else to ground him so I colored on the back of the vellum to give him a bit of a shadow.

The word is cut out from black cardstock.  I went over it with a Spectrum Noir glitter pen.  Gotta love that sparkle!  I forgot to mention that I started out with kraft colored cardstock for both the stenciled layer and the Alpaca.  I attached them all to a gray cardstock layer and onto a white card base.  All done!

I do hope you head over to Jess's Etsy store and check out her goodies.