Hey friends!  I have a secret.  I'm addicted to using my gel press to make prints.  Yep.  Because I totally needed another addiction.  Today I'm combining this latest addiction with my other addiction...slimline cards!  Sit back, grap a cuppa and let's chat.
I am using the Whoops A Daisy set from Polka Dot Orchard.  You can grab it right HERE and it's on sale (for now) at 35% off!  Don't miss your chance to stock up. 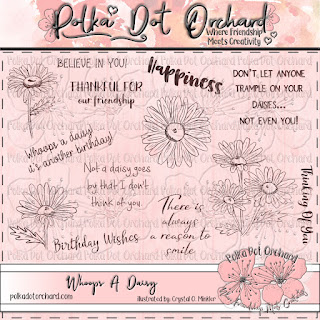 I wanted to start by showing the gel prints I'm using on this card.  Let's just say lots of fun was had during their creation. 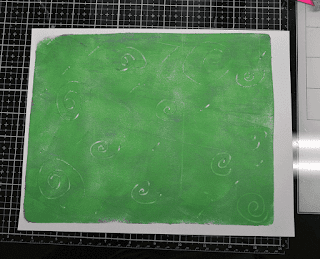 For these two pieces I started by printing the daisy image on some inexpensive cardstock.  Then I used my gel press, stencils, objects and acrylic paints. 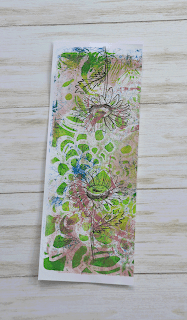 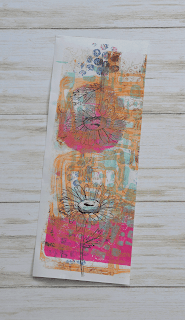 And let's see the finished projects. 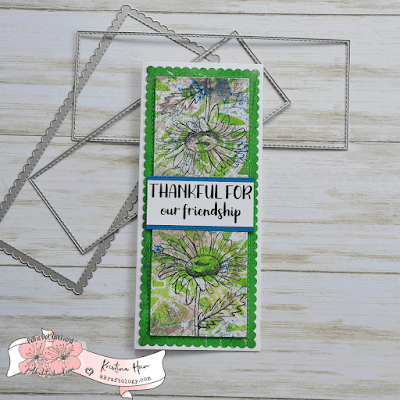 For the green version I cut the green layer using the largest die from Trinity Stamps Slimline Scalloped dies.  The daisy layer I cut using the smallest layer die from Trinity Stamps Stitched Slimline dies.  I glued the green layer onto a white card base which measured 8 3/4" x 3 3/4".  I put foam tape on the back of the daisy layer before adding it onto the green layer.
I printed the sentiment from the Whoops A Daisy set out onto the same white cardstock that I used for the card base.  I cut the blue background piece using the Stitched Slimline dies on the top and the bottom edge.  I wanted it to match the other stitching already on the card.  I glued the sentiment strip onto the blue and trimmed the edges to hang over the daisy panel. 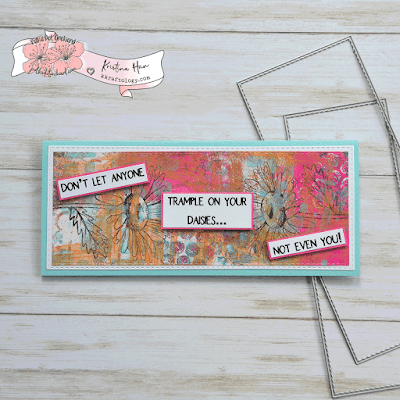 For the pink version I cut created a blue card base that also measures 8 3/4" x 3 3/4".  I cut a piece of white cardstock using the largest die from Trinity Stamps Stitched Slimline dies.  I glued it onto the card base.  I trimmed the daisy layer down using my trimmer to be slightly smaller than the white layer.  I glued it down to the white layer.
This sentiment also comes from the Whoops A Daisy stamp set.  I thought it was fun but it was too big to fit the card how I wanted it to.  I chopped it apart to suit my needs!  I layered it onto some pink cardstock, added foam tape and stuck it to the daisy layer.
I love the completely different but similar looks.  It was also fun to do it in both a vertical and horizontal orientation.
Both cards have a lot of shimmer you can't see in the photos above and I tried to capture it below.  You can also see the great texture! 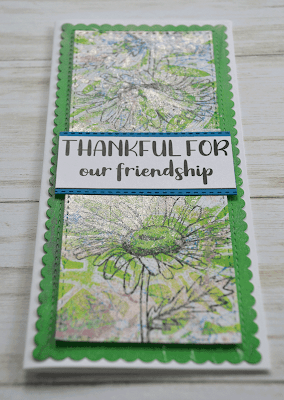 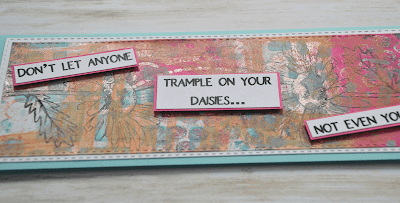 I didn't get a chance to make them yet but I plan on using the Trinity Stamps Slimline Envelope Builder dies to create some fabulous envelopes!
Now it's time to go make more messes with my gel plate and acrylic paints!
~Kristina

Supplies used:
Compensated affliate links may be used - I may receive a small commission at no additional charge to you should you make a purchase using my link.
Posted by Kristina H at 2:06:00 PM