I have to say that I simply adore the current inspiration for Craftin Desert Diva's Mood Board for the Social media challenge this month.  Just look at this gorgeousness! 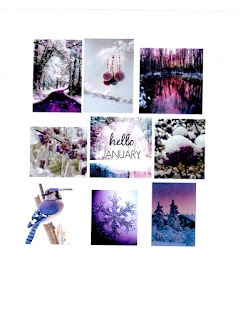 If you haven't figured it out by now, my favorite color is purple.  Putting purple AND blue together on a project = even more awesome!

My project started out small and by the end I had used a whole heap of CDD products!  Today's card features an older digi stamp but an absolute cutey!  Sock Monkey with Ear Muffs. I printed him out onto Bristol so I could color him with Zig Clean Color real brush markers.  I added white dots to his scarf with a white gel pen.  I also added it to the white spots on his eyes to make them stand out more.  Of course I needed some sparkle so used a Spectrum Noir glitter marker on the ear muffs.

The sock monkey layer was cut out using one of the smaller dies from the Fancy Frames set.  Even though the die was bigger than I needed it worked out since I wanted to put it right up against the edge of the large back ground paper.  I simply cut off the one edge!  Next I pulled out a lovely swiss dot purple paper for the next layer.  The blue paper is out of the Polar Pals Doodlebug paper pack and I cut it out with a die from the Pocket Pieces Hello set.

Next I cut the largest patterned paper piece using the largest Crazy Stitched Frames dies.  It's a bit hard to see in the picture but I sponged a blue ink around the edges and that helped it pop a bit more. At least in person!  I adhered all of the layers to the white card base,

For the sentiment banner I used curved banner from the Flag Banners set.  The sentiment itself comes from the Chilly stamp set.  The stamp actually has the words stacked up vertically.  I need them to be in a horizontal line.  So I grabbed some post-its and masked the other words.  Since I wanted the banner to stand out more, I went around the edges very lightly with a blue copic marker and popped it up with foam tape.  I added glossy accents very carefully to the words.  For the final touch I added an assortment of glitter sprinkles.

Don't forget that you have plenty of time to participate in the CDD Monthly challenge.  Remember to used #cddmonthly!

Thanks for stopping by!
~Kristina