Hi there!  My teenagers have finally gone back to school.  I'm so ready for everyone to be back on a normal schedule.  Whew!  Last week  I worked my way through the next Altenew Educator Certification Program class.  Which means I have another submission to share with you!  The name of the class was called Seasonal Scene Building.  Now, this isn't really limited to "seasons" but more about scene building as a whole.  I have to say that this is an area where I struggle.  This class helped me out with tons of different ideas!  So, without further ado, here is my card! 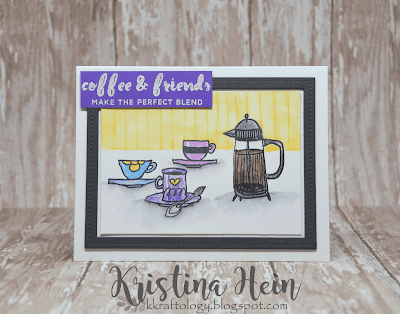 The main idea that struck a chord with me was to create a smaller scale scene and frame it in some way.  As you can see on my card, I used a die cut rectangle to create my frame.  Let's talk about the details.

I started by cutting a piece of watercolor paper down to 3 1/8" x 4 3/8" inches.  Next, I started playing around with the stamps to create the scene I wanted.  Once I had everything in place I took a picture for reference.  My memory isn't always the best and I wanted to make sure I remembered! 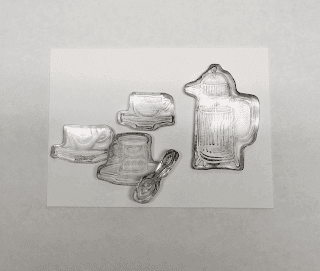 Yep, some of the stamps are overlapping the others.  No problem though as I'll be doing some masking.  I moved the whole piece to my Misti and closed the lid.  This picked up the spoon and the coffee pot.  I removed the rest of the stamps.  As I want the spoon to be in the front of my scene it has to be stamped first. 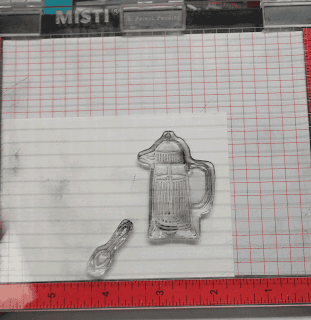 I stamped the spoon again onto some masking paper.  I proceeded to cut out the teeny, tiny spoon mask.  I then put it down over the stamped spoon.  I brought in my next stamp which is the taller cup that goes right behind the spoon.  Lined it up using my Misti, stamped it on the watercolor paper and then onto masking paper.  I stamped and cut out the cup mask.  This is the last mask I need for my scene.  I then placed the other two stamps in my Misti and stamped them.  I did want to mention I had to stamp the images a couple times to get a nice, dark image.  The watercolor paper texture makes it a bit harder to get a good impression the first time you stamp.

Here is the scene all stamped out and the masks removed. 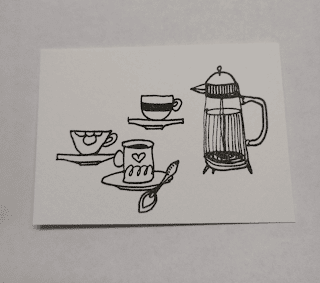 Next I brought out my Derwent Inktense pencils.  I always forget about these little lovelies but I found them again when I was doing a little holiday cleaning!  I will generally color up the entire scene before I bring in a brush and water to smooth and blend them out.  Here are the colors I used.

I laid the pencil down in a light coat as I didn't want the colors to be too dark.  For the wall, I drew my horizon line and then colored it all in with the Sicilian Yellow.  Then I put down the vertical lines with the Cadium Orange.   Here is the scene all colored with the Inktense pencils. 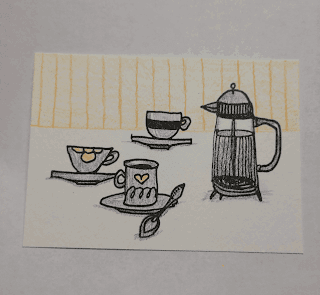 Next I worked my way through the scene with a small brush and a small amount of water.  I wanted to stay in control of where the color went so I used just the smallest bits of water.  I kept a paper towel nearby to dab off any excess water or color.  Once the cups and pot were done, I moved on to the wall.  I applied water to the stripes first.  The neat thing about Inktense pencils is that yes, they are watercolor but after they dry they are generally permanent.  So you can go back over them and the colors won't reactivate.  I wanted the stripes to dry before I went over the entire wall so that my stripes would stay visible.  While they dried, I went ahead and added water to the shadows.  Then back to the wall.  I added water over the whole wall and dabbed it with a paper towel to give it a little bit of added texture.  Here is the scene after I applied water with a brush. 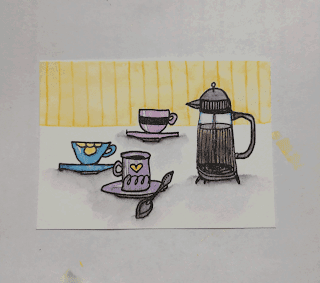 I set the scene aside to dry.  Now to the rest of the card.  I took two stitched rectangle dies and taped them together so that they would cut out a frame for my scene.  I chose a dark gray similar to the Neutral Gray Inktense pencil.  I cut it out 3 times and glued them together.  Next I cut a piece of the watercolor paper to  4 1/4" by 5 1/2'' inches.  I knew that my scene was actually a little bit smaller than my frame so the background paper was going to show through.  It needed to be the same white as my scene.  I glued it to a white card base.  Then I centered the frame and glued it down as well.  Then my scene piece.

Now I just needed a sentiment!  I found a piece of purple cardstock similar to the purple cup on my card.  I went over it with anti-static powder and stamped the coffee & friends sentiment with Versamark ink.  I sprinkled Vintage Pearl embossing over the sentiment and melted it with my heat tool.  Then I went back and brushed off the remaining anti-static powder with a paper towel.  I cut it down to a rectangle and glued it only to the frame piece.  It's taller than the scene since it is 3 layers of cardstock.  There you have it! 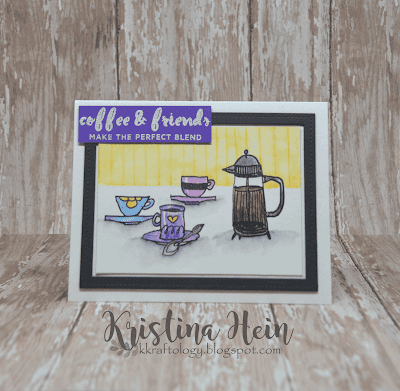 I love how these classes are challenging me to go outside my comfort zone!  Hope to see you soon!